[EDITOR’S NOTE: This was written for The Broad Street Bully website.]

The Flyers took the Internet by storm on September 24, 2018 when they announced they have a new team mascot: Gritty. Since his release, the reviews about him have been mixed. But, one thing’s for sure, he’s taken over Flyers twitter.

Whether or not the Flyers marketing team intended for this reveal to pan out the way it did, they can’t argue the level of success they achieved in unveiling a new member of the Flyers family. Even if the reviews of Gritty are mixed, mostly due to its terrifying eyes, the Internet reacted accordingly ran with it and produced an outstanding amount of memes.

But Gritty is already at the top end of Twitter followers for NHL mascots, matching the upper pantheon that includes the likes of Bailey and Gnash.

It could be said that any promotion for the Flyers, and the NHL, is good promotion. But who did the Flyers pass on before ultimately choosing Gritty?

Lucky you for all, I was able to recover a list of potential ideas that were thrown on the scrap heap before it got shredded.** 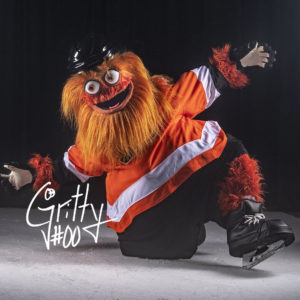 Wastey was a flawed mascot idea from the beginning. He was a mascot born out of the Flyers penchant for wasting money.

All of these highlighted moves span multiple General Managers and Team Presidents, which makes it a great mascot in terms of covering team history.

The Flyers, up until recently, did their best to waste money. That makes wasting money a time-honored tradition worthy of a team mascot to represent it. 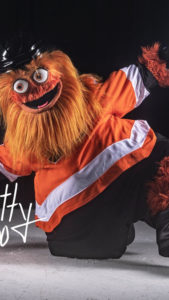 Phlex shot to fame as the mascot of the Philadelphia Phantoms before they moved on to Melvin. Melvin is the worst.

That article about Melvin from 2014 also uses the word “terrifying” to describe that mascot. And, surprise, Melvin looks similar to Gritty. They’re both orange and look like a pear.

Meanwhile, Phlex is a superhero who has nothing to do. The Flyers missed the boat on this one.

He’s a mascot with no home. Someone call him. 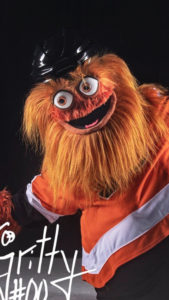 Everyone loves period intermissions because zambonis are cool machines. They are also quintessentially a hockey related thing. No other sports require a zamboni, making this unique mascot stand out amongst a crowd.

Zambo the Zamboni was a real finalist in the mascot voting. He was ultimately tossed because he made a series of controversial tweets. We won’t get into too much detail but it relates to how he handled better on ice than Pelle Lindbergh did on dry pavement. Also, if he did overshoot a turn, he has rollers on his bumpers that help with glancing blows.

Overall, a nice mascot marred by a flawed past. 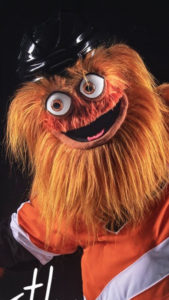 Ice skates are another one of those immediately identifiable hockey things. Slasher the Skate was in the running for team mascot up until the very end.

In fact, voting appears to have gone south once they saw what Slasher did to Richard Zednik. By the way, don’t click on that link if you didn’t get the joke.

We were going to use Clint Malarchuk but that video may be worse.

Either way, Slasher was out immediately. 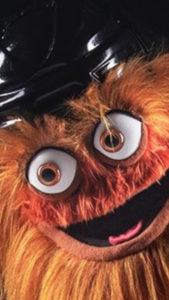 This mascot is a Thor-like character with a Thor-like hammer that says “mediocrity” on the handle. I stress that this is Thor-like to avoid any lawsuits from the Marvel universe.

In between periods, for every t-shirt he throws into the stands, he misses the stands completely with the next. When he plays the puck shuffle game, he alternates wins and losses.

He’s the picture of mediocrity.

He can also be used to accurately the describe the Flyers bottom six and their string of goaltenders dating back for the last twenty years or so.

But the potential to be sued by Marvel led the Flyers to pass on choosing him. 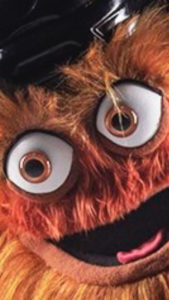 He was mentioned earlier. He is now a part of Flyers lore. Since the Flyers are still paying his buyout until 2026-2027 it makes sense to bring him back into the fold.

He’s not scared of the Penguins. Just of bears. And the Flyers barely play the Bruins. Or, at least, we just tell him that to get him in the building. The Flyers can give him a funny hat, a microphone, and let him go chat up the crowd during stoppages.

He was ultimately passed over for mascot consideration by the higher ups because his grasp of English was simply not strong enough. Since talking is most of the job, and Shawny Hill was still around, Bryzgalov fell out of contention.

In fact, they went with a completely mute mascot as a result of that worry.